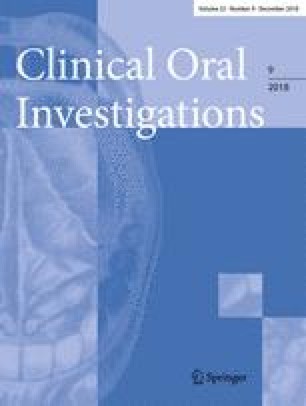 The objective of this study was to evaluate the dental color exposed to acute cigarette smoke treatment and quantify the amount of nicotine in samples exposed to cigarette smoke, after dental prophylaxis and after in-office bleaching.

Sixty-nine healthy human molars were subjected to cigarette smoke in a cigarette machine. The teeth were divided into three groups: positive control, prophylaxis, and bleaching. Forty cycles of smoke exposition with duration of 15 min each were performed using 10 cigarettes (positive control). Dental prophylaxis was performed with a rotating brush and prophylaxis paste; in-office bleaching was performed with 35% hydrogen peroxide, in two sessions of three 15-min applications, with a 1-week interval between sessions. The color was evaluated at the baseline, after exposure to cigarette smoke, after dental prophylaxis, and after in-office bleaching. Teeth from each group were powdered and analyzed by gas chromatography–mass spectrometry in order to measure the amount of nicotine present in each group. Data from quantification of nicotine and color change were analyzed by one-way ANOVA and Tukey’s test (α = 0.05).
Data for subjective and objective color evaluation, a perceptible dental darkening occurred in teeth after exposure to cigarette smoke. Dental prophylaxis was able to recover the original color of teeth however, only after bleaching teeth became whiter than at the baseline (p < 0.001). The amount of nicotine was significantly different and higher in positive control group (3.3 ± 1.3 μg/g of tooth), followed by the prophylaxis group (2.1 ± 1.4 μg/g) and the bleaching group (0.8 ± 0.3 μg/g) (p < 0.001).

Cigarette smoke penetrates into the dental structure. Dental prophylaxis and bleaching with 35% hydrogen peroxide can partially remove the nicotine from tobacco smoke. However, when in-office bleaching was applied, a more significant nicotine removal was achieved.

Consolidation in the dental industry: a closer look at dental payers and providers